Dandelions and Rubber Duckies Too 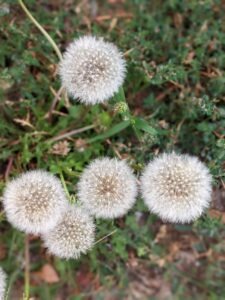 Perfection found in the alley while taking out the trash. Savor beauty wherever you find it, whenever you can. The next day, after a breath of breeze, they were gone.

Daily living and I beg to differ:

This was a headline: 55+ are going back to work. That’s news? I retired at 66 and have worked part-time ever since. To be fair, that’s due to low teacher salaries and my late arrival at the career, leaving me inadequate retirement income, but still. I can’t imagine not working. Fulltime leisure is bad for your soul.

The price of gas was HUGE in the media. Every night on the news, the knelling of its doom. We found the panic perplexing, never spent more than $50 to fill up our car, even when the cost peaked. Ah, but we have a small economy car.

I can’t shop at stores like Costco . I need two chicken breasts, not a dozen. I need ten Brussel sprouts that I select myself, not a pre-packaged plastic bag of sixty. Even my local grocery store now requires me to buy eight rolls of paper towels at a time. What happened to the two-pack? Just two of us in a Victorian house with limited storage space. I need a store that sells small amounts of everything.

Crossing Colfax on my way to Wash Park to walk with Kitty, I saw a man sitting on the sidewalk, leaning against a brick wall. He reminded me of wild homeless people in India I’ve seen in old photos. Here, we’d say he’s crazy. In India, some might call him God-intoxicated. Don’t know if this guy was the latter—wrong country, wrong dominant religion—although his skin was a dark shade not of African origin and his straight black hair tangled to his shoulders. He had a full beard, the tattered remains of a shirt open to a boney chest, baggy pants only to his knees, clothing dirty as his bare feet. He seemed alert, turned to look at a woman walking past. Untethered, he had nothing—no bag, no shoes, no blanket—could have stepped from those old black and white photos. Now such people appear on our city streets, the detritus of our decay.

The light changed, traffic moved, I drove on. I meant to tell Kitty about him, but by the time I got to the park had forgotten him, the way we forget affliction, the way forgetting is so much easier than remembering. Yet now, his image burns in my mind.

On Colfax, East HS across the street

Ukraine. I know. I too am weary of trying to continue caring about a war lasting so much longer than anyone thought it would. War always results in misery for ordinary people. And yet, this invasion left no choice but to resist it. Blinken, speaking at the U.N.: “Because if Russia stops fighting, the war ends. If Ukraine stops fighting, Ukraine ends.”

Some Russians fled when this war began, some flee now to escape mobilization or have been arrested for protesting. High level Russian officials critical of the war fall from tall buildings. I have donated to help Ukrainian refugees but also sympathize with ordinary Russians, also ache for young Iranian women, who burn their hijabs and cut their hair in the street, inviting death for doing so; also wish we cared as much for those of darker skin and different religions who are in dire situations here and elsewhere. The ordinary people of any land are never those we should despise. 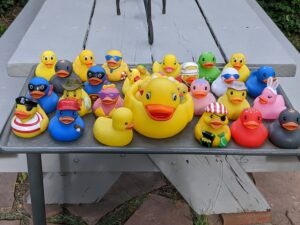 I began with the pappuses of dandelions, poised to propagate. I end with rubber duckies, a grin of another kind. I’ve had the photo for years. The Altieri-Thornton yard where these duckies live includes a pool, and thus, a reason for their existence, but they don’t need one. Looking at them makes me smile. And while humanity goes on delivering bad news, as humanity always has, we will always have dandelions and maybe duckies too.

5 Responses to Dandelions and Rubber Duckies Too