School started this August accompanied by laments about test scores: so much ground was lost during Covid. This year’s test score concern may be serious, but it is not new. I wrote the following reflection about teaching and test scores about ten years ago. I’ve revised it, of course. No writing is ever truly finished.

At first bell, three kids were in the room: María, finishing her homework, and two black guys; Michael stretched in a sullen, slanting plane to the desk; Jerome with his head down. I’d made copies of our reading: we had no textbook budget at the alternative school. By second bell I had nine students and collected homework from three. The rest would never turn it in. At a glance, I saw that Maria’s was perfect. When I started the story, Michael didn’t bother to look at it. The glitter of his eyes told me he was more angry than usual, and Michael was always angry. When I asked if someone would like to read, no one volunteered.

Kids came to the alternative school when their home schools kicked them out. They were high maintenance, so we had small classes, sixteen the first few days, seven to nine on average after that. They missed a lot. Excessive absence was mostly why schools expelled them. They attended until they earned passing credits and could return to their home schools or until they turned sixteen and could legally drop out.

“If I don’t come, they’ll take my Mom to jail,” one fourteen-year-old boy told me. “That’s the only reason I’m here.”

We were their enforced punishment.

Some read at elementary levels, had undiagnosed learning disabilities, emotional problems, absent fathers or alcoholic mothers. María, the oldest of six, missed two days of every five to take care of her siblings. When she turned sixteen, she dropped out to work as a waitress. “I have to help feed those kids,” she told me, simply stating a fact, when I tried to talk her out of it.

Michael, capable of repeating word for word a poem he’d just read for the first time, wadded up his standardized test and threw it across the room. In the student advisor’s office, he slammed his fist into the wall, leaving a hole in the plaster and broken bones in his hand. Neither of Michael’s parents came for the conference required to let him back into school.

Alternative students scored poorly on their standardized tests. This meant I was a lousy teacher. When I went to meetings and teachers discovered where I taught, they lost interest in me. Other adults wondered why I’d want to be in such a school. 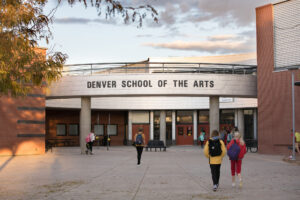 Three years later I began teaching for Denver School of the Arts. Each class had thirty students and nearly all were in the room before the bell every day. When I collected homework, 28 turned it in. My grading load was ten times what it’d been at the alternative school. When I asked for volunteers to read, a dozen hands shot up. Pick me! I used similar methods, some of the same literature, but had to ramp up the pace to stay abreast of them: supported and motivated, they didn’t suffer fools lightly. My creative writing students stormed into my room, furious about their new language arts teacher. “Ms. Dubrava, she doesn’t even know what assonance is,” exclaimed one girl, with damning disgust.

At DSA we had shiny new textbooks, parents who attended every conference and students whose learning disabilities had been diagnosed, treated, and written up in 504 plans with legal counsel backup. At DSA, auditions were competitive, kids strove to get in and were generally enthusiastic about being there. They sometimes said “thank you” when they left class. We were their reward.

“Where’s your homework?” Liz snapped at a fellow student as she gave me hers.

“You see,” Liz explained, “doing the homework and Ms. Dubrava seeing it are two different things.”

At DSA, I didn’t even have to do my own nagging.

My DSA students weren’t any smarter than María or Michael, but unlike them, DSA students did very well on their standardized tests. For starters, they never wadded them up and threw them across the room, which improves overall scores significantly. This meant I was an excellent teacher. When other teachers found out where I taught, they were impressed, wanted to know more. You have all the good kids, don’t you? It’s a lot easier, isn’t it? No and no. María remains one of the best kids I ever taught and I never worked harder than I did at DSA.

Other adults cozied up, asked, “Can you give me some advice? My niece wants to audition…”

Without changing who I was or how I taught, I had magically reformed myself.

12 Responses to My Miraculous Reformation