The Joy of Reading Jointly

It doesn’t often happen. Phil likes adventure stories I lose interest in by page three, books on typography, stuff about kerning and serifs. I approve of serifs, but don’t like reading about them. I like domestic stories and poetry he finds akin to slogging through mud. We take separate joy in our separate reading. After all, reading is private and personal and you don’t need anyone else in there with you. In fact, a book’s ability to keep others out is one of its chief charms.

Full disclosure: I interrupt Phil’s reading more often than he interrupts mine. But it’s usually for something important, like: did you see this hysterical meme about MAGA Republicans? 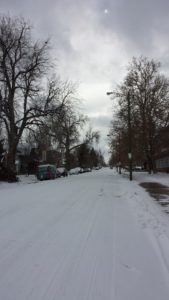 Our street, on a good day for reading

Nonetheless, when shared reading does occur, it’s delicious. You want to share books you loved. I often recommend books to fellow writers or women friends who have book groups. Less often to this man I live with. Men Mars, women Venus, etc.

I announce to our friend Marilyn that Phil’s reading Margaret Atwood, proud of my accomplishment.

He tosses me a crusty look and tells Marilyn, “After I finish it, I’ll read some Raymond Chandler.”

“To cleanse your palate,” Marilyn offers.

“Exactly,” Phil replies. “Of course,” he says, “it isn’t likely she’ll read anything from my shelves.”

“That was decades ago,” Phil dismisses.

“It’s on your shelves you’ve accused me of never reading from.”

I like Wolfe and Peake. While it’s true that marriage requires compromise, there are limits: I’m not reading Lovecraft. To be fair, I don’t expect him to read Doris Lessing either.

“The science fiction,” I retort. “Oryx and Crake.”

“So? This novel has science fiction in it.”

The Blind Assassin, novel within a novel, one masquerading as memoir, the other as fiction embellished by science fiction. I’m forced to give him the point. Marriage is sometimes a competition.

The Blind Assassin is on my shelves, read twenty years ago. Rereading a book read long ago is like meeting someone vaguely familiar: don’t I know you? Besides, I’m a different reader now than I was then. This time I noted writerly things: the careful scaffolding from which the bricks were laid and subtle character development, building toward the person who isn’t fully revealed until the end, when although stunned, you nod, yes, that’s precisely who she was and what she would do.

I shared a few things with Phil, particularly from the science fiction sections, tempting crumbs left along the path, and so he began reading it, days after I finished. He snorts. “What?” I demand and he shares a few sentences with me. They represent a part I loved too or something I passed without noticing and now enjoy more than I did in my own reading, like that first pleasure in Thanksgiving leftovers, the next day, when you nibble from your favorite dishes.

Phil laughs. “What?” I ask. “Reenie,” he says, and reads: “Reenie said God made people the way she herself made bread, and that was why the mothers’ tummies got fat when they were going to have a baby: it was the dough rising. She said dimples were God’s thumbprints.”

Reenie’s folk wisdom: don’t take a shower or talk on the phone when there’s a thunderstorm. Things our grandmothers said. Reenie, the faithful servant, source of family history, who keeps those two girls alive after their mother died, takes meals to father when he locks himself in the turret, drinking. Reenie, full of dubious dictums, is often quoted over the decades by the girls she raised. As Phil reads aloud, I think about the class critiques woven through this story and how Reenie is like Faulkner’s Dilsey in The Sound and the Fury. In both novels, the pathetic end of former aristocracy, maintained by servants who endure.

Phil reads a paragraph about Iris and Laura hiding Alex in the attic for two weeks. (Never mind why. Read the novel.) The vivid detail does more than describe, gives the differing emotional impact this event has on the girls, impacts of significant foreshadowing I didn’t note before.

Phil and I relish craftsmanship in writing, usually appreciate it privately. It’s a joy to sometimes share and augment the experience. I bite my tongue to keep from giving things away, am disappointed when he figures out one part of the puzzle earlier in the book than I did, enjoy our discussion once he finishes it. He returns the book to my shelves protected by a new brodart cover. In his view, I don’t take proper care of my first editions. “Well-written,” he pronounces. “But I’m glad it’s over.”

6 Responses to The Joy of Reading Jointly