News, Restaurant Reviews and the Primary is Tuesday, June 28

The January 6 hearings have been full of facts and testimony about the former president’s effort to stay in office illegally, refusing to accept the peaceful transfer of power, the core of our democracy. He still claims he won, in spite of sixty court cases finding no evidence of fraud in the 2020 election. Multiple recounts in several states found no differences in vote numbers. Our election systems work. Trump was willing, not only to throw Mike Pence under the bus, but to let the mob he set loose kill his own VP.

And yet…to date, across the country, over 100 election deniers have won their Republican primaries. For some, no amount of evidence is enough. For some, lying to get elected, an attempted coup, the destruction of democracy, the fomenting of hate for everyone not white and non-hetero, seem like good ideas.

Voting has never been more important.

In Colorado, Juneteenth is now a state holiday as well as a national one. In 1984, Phil and I moved to a predominantly black neighborhood near downtown Denver. We were startled one June morning to find a parade staging on our block. There were drill teams and beauty queens perched in convertibles, floats and Shriners on little motorcycles, politicians running for office handing out candy to the kids and campaign literature to the adults.

Except for the politicians, it was an all-black event. The parade route went north on Williams past Fuller Park, west on 29th to Five Points. People sat on their porches to watch it go by. We’d never heard of Juneteenth. The white friends we talked to knew nothing about this celebration of the day slaves in Texas belatedly heard they’d been freed. Now it’s a national holiday, like Cinco de Mayo may become a commercialized excuse to party, but at least everyone will finally face the fact that emancipation deserves celebration.

The Colorado legislature also established an office to focus on missing and murdered indigenous women, funded a new program to treat behavioral health in children, required surveillance of voting systems—I call this the Tina Peters prevention law—created at least 30 days of free RTD for high-ozone season, slowed the rise of property taxes, strengthened air pollution regulations, and made the right to abortion a Colorado law.

I pulled all this from “Here are 38 need-to-know laws, many already in effect,” a useful Denver Post article, June 17, 2022. They did a lot we can be proud of, not enough in some areas. But that’s democracy for you. Never as snappy as dictatorship. 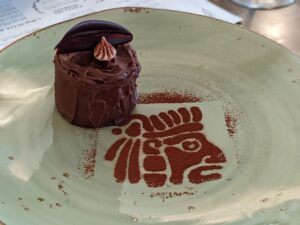 This decadent dessert identifying as indigenous was the culmination of dinner at Lucina in Park Hill. (Denverites take note.) Latin American-based menu. What passes for average cost these days. Two can eat for $100 if you include a glass of wine. (Generous pour.) Croquettes to die for, the tortilla española nowhere as good as Victoria’s, who moved to Florida and is probably not reading this. Pity we can’t eat at Lucina again. Went at five on a Tuesday night and still so loud we could not hear each other.

The same applies to our nearest breakfast place, Syrup. Is there a quiet corner? “We’re a hoppin’ restaurant,” the hostess replied cheerfully. That means no. No table without a speaker blaring above it. “I don’t know if it’s better or worse that they’re playing our music,” I said. Rolling Stones when we walked in. Eric Clapton’s Layla soon after. At 7:30 a.m. I’ve heard that music, heard it high and heard it sober, owned it, got over it, now prefer Bach at background volume with my coffee, prefer being able to use an inside voice to converse with the person across the table from me. Another place we can’t go again.

Vote in the primary, vote in November, people. It matters. The January 6 committee is proving how much it matters. And if you know any quiet restaurants, please post that in the blog, where I can keep them, not on Facebook, where they will disappear like democracy if you don’t vote.

7 Responses to News, Restaurant Reviews and the Primary is Tuesday, June 28