It’s discouraging when battles fought and won have suffered setbacks and must be fought again. If it’s any consolation, the fight won’t be the same. No matter how hard they try, 2022 is not 1972. Women are tougher than they used to be, accustomed to regulating themselves. Among the under-forty female contingent I’ve seen few shrinking violets. 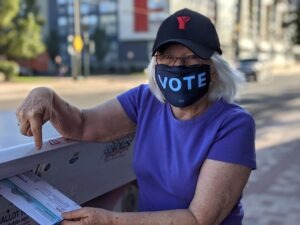 In 2022, some states have laws protecting women’s rights, some doctors have sworn to help—there’s a list of over 700 GYNs around the country who will tie your tubes without asking if you’re married or have kids or how old you are. The demand for contraceptives has risen. Vasectomies are up. (Responsible men, wow.) Many groups were ready to roll. The indefatigable ACLU, working with Planned Parenthood and The Center for Reproductive Rights, had briefs set to file. #NotChristianity is trending.

In several states, legal actions already stopped (temporarily) the enactment of trigger abortion laws, and lawsuits are hitting like hailstorms everywhere. A Jewish group that believes you’re not a person until you’re born is suing anti-abortion laws as violations of their religious beliefs, for example. People are assembling information about where you can legally go and how to get there. Corporations—who knew I’d ever say something good about corporations—have said they’ll provide travel expenses for employees forced to go out of state for their health care. Forcing a raped ten-year-old girl to have a baby—#That’snotChristianity—thank God she got out of Ohio to someplace more humane. 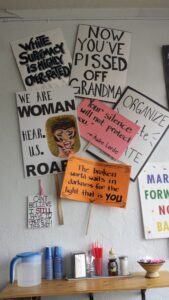 The ACLU also works relentlessly to protect voting rights. If we’re going to stop this slide back to the 19th century, voting is the most important action we can take. To counteract, as Jim Thompson put it, “the sweeping diminishment of rights by the new radical right-wing Republican-appointed SCOTUS.” So far, SCOTUS has curtailed the right to vote, the right over our bodies, right to keep church and state separate, right to breathe clean air, and made it easier to have guns. To stem this tide of hate, of anti-women, anti-LGBTQ, anti-minority poison, to have any hope for sensible gun control, we need to keep and expand the Democratic majority in Congress this November.

I know. The Dems are a sorry bunch. Dem centrists and Dem progressives don’t get along. I wish they’d stop bickering among themselves and take stronger stands for climate change, voting rights, women’s rights, and the preservation of democracy. But they’re all we got right now. That lying conspiracy intended to overturn the peaceful transfer of power is coming from Repubs. There are some decent Repubs still: Liz Cheney, although I despised her father, has put her career on the line to defend the truth. Kudos to her. Kudos to all the Republicans who have testified in the January 6 hearings. Takes guts. Excepting the Boebert embarrassment, in the Colorado primary Republicans defeated every Trumper election denier. Good on ‘em. And there’s my friend Sue in Vero Beach, Florida, also a decent Republican.

Speaking of Florida, the Governor of California recently ran an ad addressing Floridians: “Republican leaders are banning books, making it harder to vote, restricting speech in classrooms and even criminalizing women and doctors.” Gavin Newsom continued: “I urge all of you living in Florida to join the fight—or join us in California, where we still believe in freedom…” Newsom closed his appeal with the words, “Don’t let them take your freedom.” That’s the kind of fighting spirit we need. And yeah, move to California. We’re full up here in Denver.

Friends asked me to let them know what I’m doing. I’m upping the monthly amount I give to the ACLU. They work like mad for us. Supporting news organizations that speak truth. Supporting congressional races in which Dems have a chance of replacing election deniers. I’m a retired teacher. Small donations. In-kind support, like writing postcards to voters, being a Dem block worker. The usual midterm outcome, that the party in power loses, would be disastrous this time. Jim Thompson is pessimistic; thinks we’re downgrading “from a democratic republic to an autocratic kleptocratic theocracy.” I still have hope.

In other news, you know presidents have little power over the economy, right? Covid, supply and demand, the Russian war on Ukraine are the major causes of inflation. Just sayin’.

3 Responses to What To Do