A few months after becoming 78, it dawned on me that I was less than two years from 80. (I’ve always been a bit slow at math.) I have lived longer than my maternal grandmother, who died at 67; than my father, who died at 59; than my baby brother, who died at 33. Far from being achievements, these facts leave me sad. Yet, all three of those people remain active in my life. 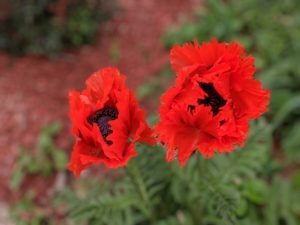 Two of the plethora of poppies this June

I remembered Henry Miller’s chapbook, On Turning Eighty, 1972, the first sentence of which reads:

If at eighty you’re not a cripple or an invalid, if you have your health, if you still enjoy a good walk, a good meal (with all the trimmings), if you can sleep without first taking a pill, if birds and flowers, mountains and the sea still inspire you, you are a most fortunate individual and you should get down on your knees morning and night and thank the good Lord for his savin’ and keepin’ power.

Thus Miller pontificates, cocky and proud, still loving a long, juicy sentence and not above dropping into dialect at the end of it. He had eight more years, died in 1980. At eighty, he was a happy man.

Miller says he only began to feel young in his forties and was ready for it then. By contrast, he quotes Picasso: “One starts to get young at the age of sixty, and then it’s too late.” Miller spent his numerical youth in Paris in the thirties, that splendid between-the-wars decade when so many writers and artists came to Paris, living in the kind of poverty you can be oblivious to when you’re young. You know it’s temporary. You know you’re going to be rich and famous.

To Miller by way of my maternal grandmother, I owe dubious recognition for teaching me the word “cunt.” I was thirteen. My grandmother, coming from New York to visit us in Florida, privately slipped me a copy of Tropic of Cancer. “For my little writer. It’s banned, but you can buy it under the table,” she whispered.

“Perhaps the most comforting thing about growing old gracefully is the increasing ability not to take things too seriously,” says Miller. 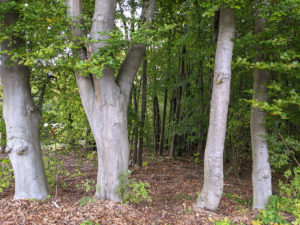 I have emails asking me to join a club or campaign or several such things. But I can’t, you know. I’m almost eighty. Just look at the poppies in my yard this spring! Not these trees, though. These trees are European. They made me stand still to contemplate their serenity—for a moment. But now, as Isak Dinesen said, without hope and without despair, I write this.