I Think I Can

I own a stripped-spine copy of The Little Engine That Could. I’m not sure how I came by it, but with its soiled cloth cover rubbed bare at the corners, it could be the very book I had as a child. I read it in my grandparents’ house in Queens, where I lived from age six to eight. It was a good book for learning how to read, with all those good little boys and girls on the other side of the mountain being repeated every time the funny little clown asks the next engine who comes along for help. It is also an inspirational story. Those for whom the task would have been easy decline; an old engine sighs, “I can not, I can not.” Finally the Little Blue Engine offers, “I think I can—I think I can,” but says it many more times than twice. 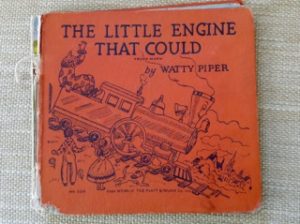 The copy of the book that might have been mine

It was my favorite book. I must have loved the repetition. Maybe the message too. That someone little could climb mountains. That good children would get their food and toys because the Little Blue Engine practiced positive thinking.

When 45 was elected, I resolved to Do Something. The Women’s March, calling congress, sending postcards, posting political bits on Facebook. But marching in the streets is a young person’s game. I knew I wouldn’t keep doing it. So I also resolved to volunteer in an area this administration threatened. So many choices: our precious national parks, the environment, travel bans, opposing walls, health care. But I’m a teacher, went with my skill set and became an in-home tutor for a refugee learning English. Just me, helping just one young woman.

F— is 25, had only been married a few months when her husband M—’s application was approved and he came here. Already pregnant, she joined him two months later, when he had the tiny apartment and the night shift maintenance job. She took English classes until the baby came. When we met, she had been here nine months and the baby was three months old. “She is lucky,” M— said, holding his daughter, “she’s an American citizen.”

F— confused dimes and nickels, kept thinking the larger coin should be worth more. She mixed up question words: where and when and why. We worked on those things and the basic grammar and speaking lessons the program gave us. She catches on quickly, does her homework.

Their rectangular four-story apartment building is in the middle of a row of four-story apartment buildings. In the minute foyer I should have to buzz them, but there’s almost always a stone holding the inside door open. I climb narrow stairs, a smell of cooking oil wafting down the hall, the sound of several languages coming through nearby doors, a baby crying. Taking off my shoes, I have learned to say, “Salaam aalaik,” which makes them smile, and they respond, “Aalaik Salaam.” Peace be with you. And with you also.

At first F— was quiet, but now she says, confidently, “How are you? Come in.” The tea set she brought with her from Afghanistan is always on the cof—excuse me, the tea table—usually with a small plate of muffins she’s made. In deference to me, we sit on the couch. Once I arrived as they were finishing a meal, a quilted cloth spread over the carpet by the floor cushions, their dishes arranged on it. I imagine it keeps the hips and knees flexible if you do that all your life. Alas. Too late for mine.

I could feel F— tiring of the book exercises after a month. Our conversation choices are restricted by her limited vocabulary. When I taught Spanish, I collected children’s books in Spanish and my high school classes read from them every week. “Oh, Sra. Dubrava, it’s Good Night Moon!” a girl would exclaim, and hug the book to her chest. Buenas noches Luna. Books we loved when small evoke misty memories, even at sixteen.

The next class I brought The Hungry Caterpillar. F— was delighted, could read it to me almost fluently. There were only five new words. “Lollipop” was one. I brought her a lollipop next time, a large round red and white one like the illustration. She added the new words to her vocabulary list, writing the elegant Dari-Persian translations after them.

For one class, the baby was fussy. We spent most of our time taking turns holding her. Another was cancelled for a medical appointment. More than a week later, I came again. F— was excited. “I go shopping,” she said, and I made a note to work on past tenses. She pulled a shiny new book out of a plastic bag. The Little Engine That Could. I hugged it to my chest. I read it to her. She read it to me. When she came to, “I think I can,” she laughed over the repetition and said, “I think I can learn English.”

12 Responses to I Think I Can