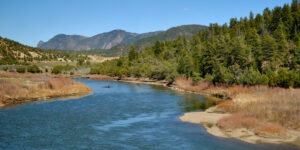 Colorado River 2012, from the California Zephyr

The Denver Post special report by Conrad Swanson, July 24, 2022, is one of those lengthy investigations that are the reason I still read the Sunday paper. My highlights follow.

That cracked land on the cover hasn’t been dry since the Glen Canyon Dam was built in 1963. Lake Powell is the reservoir of that dam, one of fifteen on the Colorado River, which has more dams than any other U.S. River. The Colorado runs 1,450 miles from Berthoud Pass to the Sea of Cortez, or it once did. Now little is left by the time it reaches the coast. 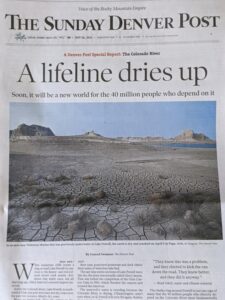 In 1916 and 1920, before the Compact, hydrologists raised red flags. They have continued to issue warnings. The Compact was based on water produced in wet years and was over-estimated besides: mythical amounts. In 1965, Royce J. Tipton, civil engineer, said “there is not enough water in the river to satisfy the apportionments under the Compact and the allocation to Mexico under the Mexico Water Treaty.” Nevertheless, the Compact siphoned on. By the 1990s, Lower Basin users California and Arizona were taking more than their share.

In 1999, Lake Mead and Lake Powell were nearly full. The drought that began in 2000 is now a megadrought or worse. “This is not a drought; this is aridification,” Rhett Larson, a water law professor at Arizona State University, said. “This is the new world we live in.” Droughts cycle through centuries, but this one is amplified by climate change. “For every degree of average temperature rise, rivers and streams decline 3% to 9%.” Since the 1922 compact, Colorado’s average temperature has risen 2.5° F. In 2021, Colorado had a “pretty good” snowpack (89%) but due to higher temperatures and drier conditions, only 37% of that runoff reached Lake Powell.

Cuts have been made to Compact allotments over the years and were made again in 2021. Yet that year, California and Arizona used 117% of their allotment. “It’s no longer an option for the lower-basin states to use more than we have,” Colorado Attorney General Phil Weiser told The Denver Post. Upstream and downstream both need to restrict water use.

Excluded from the 1922 negotiations, Native American tribes were added later. The tribes have also not been involved in current negotiations, according to Mountain Ute Chair Manual Heart. The Utes use only 10% of their allotment. Thirty tribes depend on the Colorado River. If they used what they’re entitled to, we’d have a serious problem. Yet government officials keep proposing projects to take more water.

Denver Water’s Gross Reservoir in Boulder County is an example. Mark Aquillace, a water law professor at University of Colorado, declared, “I’m stunned that people haven’t risen up and said, ‘Why are you doing this?’ We cannot continue to do business as usual. It’s not working.” To be fair, Denver is using less water now than in 2000, despite population growth. Conservation efforts are being made, but not enough.

We lost ground in the battle against climate change during the Trump administration. Biden has been undoing some of that damage. His Bipartisan Infrastructure Bill doubled the Reclamation budget, for example, making more water-saving projects possible. Most allocated water goes to agriculture. Some are growing less alfalfa, raising less cattle, other thirsty crops. The downside: what does that do to farmers? The downside for people in general: reduced supply means higher food prices.

Lake Mead is at 30% and Lake Powell at 25% of capacity. Powell has a chance of not having enough water to generate electricity in the next few years. Even if utilities are diversified enough to absorb that loss, the cost of power will increase. We have come to depend on something we perhaps should not have built in the first place.

On a trip down the river this summer, Diane Carman, Denver Communications Consultant, saw a water line in Glen Canyon two stories above the present surface of the river. Many celebrate the reemerging of those walls. Many protested their loss: remember Edward Abbey and The Monkey Wrench Gang. Carman declares:

“Even Barry Goldwater, hardly an environmentalist, mourned the loss of the canyon. Upon his retirement, he said the only vote he regretted was the one to dam Glen Canyon, a place he had visited as a child and never forgot.”

This summer, the U.S. Senate has another chance to pass modest climate action funding. On the last vote, every Republican and one Democrat voted against it. Too costly, they said, ignoring the enormous costs we’re already paying in floods, wildfires, bad air, worsening storms, eroded shores and record heat. In the aridifying Colorado River Basin, we may soon—in our children’s lifetimes if not our own—add the cost to be paid for drinking a river dry.

3 Responses to Mourning a River