Notes in the Hottest Month

I weed before the light fades. Temps have inched down from 98° to 88°. Contrast is vital: 88° feels cool. As I reach the front yard a slender black woman walks past, pushing a stroller, a small boy on one side, a smaller girl on the other, each holding onto the stroller with one hand, securing their connection, all three softly singing: m-n-o-p abreast of me, q-r-s-t as they pass the next house and u-v-w-x-y-z now I know my ABCs as they reach the end of the block and the children release their grip on the stroller to applaud, three claps each, in unison. 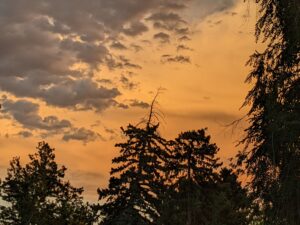 Our neighborhood grocery is a mile nearer downtown and areas of homeless concentration. We shopped there for decades, chatted with and were cheerfully served by Michelle and Marie and a half dozen other long-term employees. The homeless moved closer, increased. Tents mushroomed on a strip of grass behind the store and grocery carts disappeared from the parking lot until no carts were left. Twice, we found no carts, went elsewhere. Now there are carts again, but they cannot leave the store. Michelle spotted us when we walked in, welcomed us back. A young man loaded our sacks onto a hand truck, put them in the trunk. The strip behind the store is fenced off, tents gone. The fence is a forbidding barrier, like the large rocks that spike downtown businesses’ parking strips: passive aggressive landscaping. I’m glad not to have that longer drive, to shop at my local store again. But the homeless have not been housed; they’ve only been swept to another streetside camp.

M describes her visit to a gated development with her friend, for a meeting of a group in a variety of professions including medicine and law whose commonality is that they also play piano. For years they’ve met monthly to play for each other, private recitals. M says they’re an intentional community, play well, love music—that aspect of her visit was a joy. The house made her fear she’d break out in hives, with its too-lavish rooms, grand piano and “an embarrassment of chandeliers.”

July 12 was National Pecan Pie Day. That’s just wrong. No below 90° days expected for the next month. Who’s going to bake a pie? Besides, pecan pie is as Thanksgiving as pumpkin. Pecans are harvested in the fall. July? Our hottest month? That’s wrong.

I’ve said (and I’m not alone) we’re on a decline and fall into barbarism in this country. A trivial example: for many years, the torment of backyard fireworks continued weeks after the 4th, stressing animals, disturbing sleep, rattling my neighbor who has worked in war zones. This year, three nights after, all was quiet, only a rare explosion or two a few days later. In such small signs, I find hope for humanity. 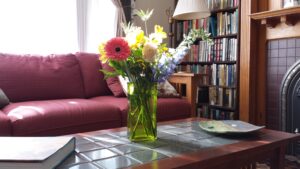 A quarter of the living room books

Only 50 pages are left in the book I’m reading when I realize I haven’t asked the library to deliver another. I experience a moment of sheer panic, even though I live in a house with hundreds of books on shelves in almost every room. 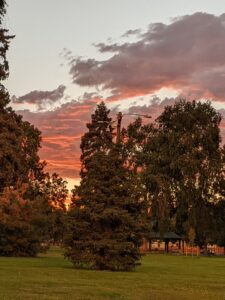 There are clouds, so a chance of sunset art. I leave the house at 8:10, for a sunset scheduled at 8:20-something. The 100° day has cooled to 89°. A chanting, cheering pair of ultimate frisbee teams are finishing a playoff on the Manual football field, oblivious to the scarlet and gold display above them. Denver sunsets have a 360° quality: to the east a colossal cumulus goes from white to cream to neon pink while to the north and south some slivers of cirrus do the same. Treetops go gold and rosy while shadows pool at their roots. To the west as the sun dips behind the powder blue Front Range, the show includes neon edges before flat underbellies streak from pink to tangerine and towering tops turn gun metal gray. All that in ten minutes. The ultimate frisbee teams are packing up. By 9 it is dark. And almost cool enough to sleep.

5 Responses to Notes in the Hottest Month