In 2022 news, Southern Baptists covered up abuse of young children. Catholics weren’t the only branch of Christianity to do this after all. Because Baptists are in the news, I’m re-running this post from the 2017 archives.

In 2017 the Southern Baptist Convention voted against white nationalism at its annual meeting. The resolution condemns “every form of racism, including alt-right white supremacy and every form of racial and ethnic hatred as of the devil.”

1961: Preacher called a meeting of choirs and deacons. “What’s this about?” One of the other youth choir members whispered. Preacher paced a bit, like he did when he delivered sermons, telling us how important we were in this matter. “The congregation will take a cue from you. If you stay calm, they’ll do the same.” Now we knew what it was about: kneel-ins. 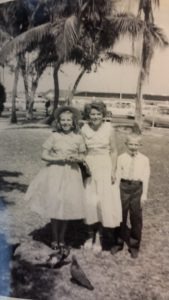 1957: we moved from Daytona to Vero Beach halfway through my seventh-grade year. Dad was taking a mechanic job at a crop-dusting service, giving up his yacht captain career for the family. Since we left New York when I was eight, we’d moved twice a year to follow his boats. Mom said he could keep doing that, but she and the kids needed to stay in one place. For her the straw was my brother having to repeat first grade.

1939: as a teenager, Mom belonged to a New York Baptist church. She talked about church socials, the Puerto Rican and Italian friends she had there, and a Rican guy she loved dancing with. I have a feeling those boys weren’t Baptists, came for the girls and the punch.

1955: that Baptist church was not like those in Florida, where dancing was prohibited. I don’t think she realized that or knew Southern Baptists had split from Northern Baptists in 1845 over slavery. She and Dad dropped us off for Sunday School and on Easter we got new clothes and all went to a service together.

1957: moving was hard on me too. By the time I’d made friends, we’d move again. Vero’s junior high was my thirteenth school. Perhaps moving had made me an introverted reader. Because even in Vero, I didn’t form the friendships I observed in others—sleepovers and shopping and the drugstore soda fountain after school to drink cherry cokes. I didn’t know my classmates had been raised in Vero, went to kindergarten together, had a depth of connection I’d never known.

Mom sent us to the Vero Baptist church. At 13, I was old enough for “Afterglow,” a youth ice cream social following Sunday evening’s service. I had my first home-made ice cream—peach—a taste revelation. The youth choir graciously accepted my dubious alto even though I’m apparently tone deaf. I learned enough about scripture to survive a few rounds of Bible drills. “Psalms 24:1,” the drill leader called and we flipped open our Bibles, trying to be first to find it.

By 1960 or so, boys had cars. We sometimes skipped Afterglow and sped down washboard dirt roads, shrieking as we fishtailed, or drove to the beach to barefoot through the phosphorescence of nighttime surf and make out in backseats. The church helped me transition from being a seasonal migrant to a full time member of a community. I’m grateful for that. And for the peach ice cream.

1957: children don’t question the world in which they find themselves. There were no black people—not in my neighborhood, not in school, not in church. There were black people, and the downtown department stores that solicited black trade had Colored and White drinking fountains, but no one black was ever in the drugstore where kids gathered after school. I never thought about it. It just was.

1961: I found a copy of Richard Wright’s Black Boy in a secondhand store. I was sixteen. Scales fell from my eyes. Black people had been treated in highly unchristian manners. I became aware of distant movements stirring, kneel-ins among them. Black activists showed up to desegregate white churches throughout the south. Preacher held his meeting with deacons and choirs, about what we’d do if a kneel-in came to our church. “We’ll seat them,” Preacher said. “Outside agitators: they won’t come back.”

My beliefs and Baptist policy felt like opposing systems as I sat in that meeting. I said nothing. Nor did anyone in the youth choir. But a male adult choir member muttered, “no nigger better sit next to my wife.” Those around him nodded. How could Christians talk like that? Outraged, I thought, “these people are of the devil.” I read Emerson, who said why not go to your heart first, never entered a Baptist church again. There is no judgment so harsh as one made in ignorance, whether mine or that of the adult choir.

2017: I’d learned that people do all manner of evil in the name of religion. Baptists don’t have a corner on that and surely, there were good people in that church. I was on my way out anyway. Emerson led to Thoreau and civil disobedience. Wright led to Baldwin and civil rights. My gypsy childhood left my ties to Vero tenuous, easily undone. Queens was more my home than a succession of Floridian East Coast towns.

Southern Baptists finally passed a repudiation of slavery in 1995. Reading about their 2017 resolution, I thought perhaps the organization was finally coming to Jesus. But at the same meeting, they voted to condemn Planned Parenthood. Poor women in need of healthcare can go to hell. And now sexual abuse cover ups. In 2022, my decision sixty-two years ago still stands.