Went to Pete’s Kitchen for a downhome diner breakfast last week because it was 7 a.m. and what else is open? On the way in, we skirted the chunky splatter of vomit in the parking lot. “It’s still Colfax,” Phil muttered darkly.

A mound of fried potatoes, eggs cooked as specified, Phil’s foothill of pancakes, and oh, yes—that dishwater coffee, all served in under ten minutes. Phil says they boil water and run a few grounds of coffee through it. I only hope the water was purified before it got to us, after it left shrinking Lake Mead where they keep finding bodies. Or maybe we get our water from shrinking Lake Powell. It doesn’t matter—we all live downstream. 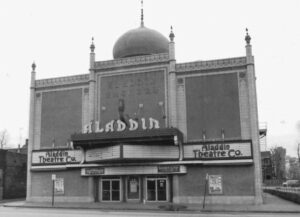 The Aladdin on Colfax

Two burly Mexicans cook behind the counter—you can watch your eggs hit the grill. Large, economy-sized Mexicans, lean and muscled. Where did the Greeks get these guys? Does Pete the Greek still own this place? A couple of the cooks’ friends sit in a booth nearby, and a rapid exchange in Spanish sails over the counter and back again. I catch nothing except “güey” and “cabrón” amid laughter, which is how I know they’re friends.

In the booth by the Colfax-facing window, a tall bald white guy gets up with his laptop to show the cooks the photos he took, tells someone at the counter it’s a year-long project. He’s shooting all of Colfax, Aurora to the foothills, people, businesses, architecture. Over 50 miles of Colfax Avenue, the longest city street in America, he says. The guy at the counter starts telling the photographer what’s gone from Colfax now. Smiley’s just went. Long ago, The Aladdin theatre was at Race Street, where Walgreen’s is now.

The demolition of the Aladdin was why I boycotted that Walgreen’s for years. In 1971 I was in a throng of hippie kids, seeing “Johnny Got His Gun” at the Aladdin. Trumbo pulled no punches in that bitter antiwar story.

As we’re paying, an older man knocks on the window as he passes, and the young cashier turns to wave at him. He grins, revealing missing teeth in a street-tanned face. I imagine she sometimes gives him a breakfast burrito to go. In the parking lot, the remains of last night’s vomit have been hosed away. 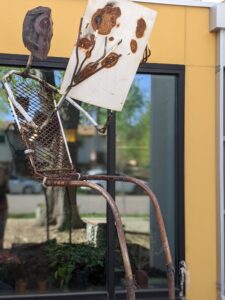 My local clinic doesn’t have what I need, so I drive twenty-five minutes east from Denver to Aurora, past 225 to a facility from which the Front Range is visible and more distant, a place where you can see the start of endlessly rolling plains. An empty field in fact stretches next to the HMO, home to a plethora of prairie dogs, too accustomed to people to do more than amble to their dugout dens, poke out their heads and peer at us. 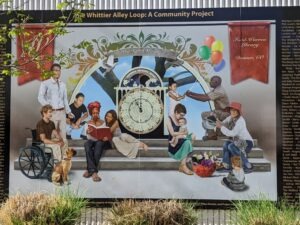 At Ford Warren Library, around the corner from us, a good-looking black girl on roller skates, thick braids wrapped around her head, glides to the checkout counter with a stack of books. “I put in a lot of holds,” she explains, “didn’t think they’d all come at once.” She stuffs eight or nine books into her backpack, skates out the double-doored entry like she’s been doing it all her life.

Outside the library, on rustic benches built by the neighborhood association, five young people sit in a circle. Several have notebooks, pens in hand. They return my smile as I pass. The benches, the mural, and Bob Ragland’s reader sculpture were installed at the same time a stripe was painted on the sidewalk and down the alley, representing the redlining boundary. Black and Hispanic people on the wrong side of it couldn’t get loans to buy or improve houses through the 1970s and longer. Painted five or six years ago, the line is nearly worn away, but you can still tell it was there.