War Is Not Good

I read a few classics every year, which led to the discovery that the library is often in short supply of them. I was waitlisted for Great Expectations last year. I ordered The Brothers Karamazov three months ago, long before Russia invaded Ukraine. The mighty tome finally arrived last week.

My entry to read-on-my-own great literature began when I was fourteen, not with Melville or Whitman but Tolstoy and Dostoyevsky. I came from a family for which finishing high school was the highest achievement and books were mostly absent. My high school librarian directed me to the “teenage” romance novel section, books that bored me in two pages. I saw my classmate Joy Duncan reading. “This is good,” she said. War and Peace. I made note of the 800 section of the library, which they’d been keeping secret, and never looked back. Russians are some of the world’s most amazing writers: Chekhov. I rest my case. Chekhov had a summer house in Ukraine, a place he loved. 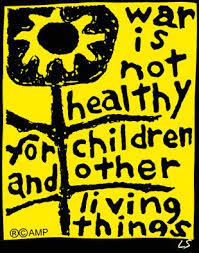 Poster popular in the 60s, featuring a sunflower

Humans tend to see things as black or white, right or wrong. I’m moved by the David and Goliath story of Ukraine, by their courage and spirit in facing the vast Russian army, wrote a poem about it,

gave to Doctors Without Borders and Project Cure, organizations assisting refugees. But people are avoiding the Russian Tea Room, for crying out loud. All things Russian are not to blame.

After meeting Putin for the first time, when he took over from Boris Yeltsin, Madeleine Albright made a note to herself, recently revealed, to the effect that he was cold as a reptile. In news coverage, I notice the deadness of his eyes. He has attacked civilians from the start, has lost many of his own men, soldiers and generals alike. He’s bombed near Chernobyl. He takes Ukraine’s defection personally.

Putin is not Fyodor Dostoyevsky, who was convicted of violating the Tsar’s censorship laws and sent to Siberia. Putin puts people in prison for violating censorship laws. His war is unpopular with many Russians, who have demonstrated against it at great risk to themselves. Thousands have been arrested for doing so. Thousands have fled the country. How many of us are sufficiently opposed to something the U.S. is doing to abandon everything and leave? And God knows, the U.S. has done much worth being outraged about. Courageous people, these ordinary Russians.

Early in The Brother Karamazov their father moves to Odesa. Odesa was part of Russia in the 1870s. There’s an animated map that starts in the Middle Ages and shows the morphing of European boundaries through the centuries to the present day. Empires bloom and shrivel and people speaking Ukrainian or Russian or a dozen other languages in the borderlands between east and west have had much to suffer.

Putin thinks Ukraine should not be its own country, no matter that 90% of them voted for independence, that they’ve been independent since the Soviet Union ended in 1991. He accuses them of being neo-Nazis and indeed such a group exists, though their party obtained less than 2% of the Ukraine vote recently. We have neo-Nazis right here in the U.S. of A., as does Germany. Ours like to burn down black churches among other things. All about white supremacy, those people.

A few weeks ago, a poet of Ukrainian origin here in the U.S. asked the editor of a literary magazine in Odesa how they were doing. The editor replied, “Putins come and Putins go: we’re trying to publish a magazine. Send us some poems.”

People everywhere just want to live their lives. They want to raise their children, follow their own beliefs, move into satisfying careers. Russians or Ukrainians or Afghans or Americans: they just want to live their lives. An Iranian cabbie told me a few years ago, “I came here so my daughter could get an education.” People want to be able to go to work, buy groceries, come home and watch TV. Maybe join a soccer league or visit the zoo. Send their daughters to school. Put out a poetry magazine.

Dostoyevsky is not an easy read. It’s the 19th century, so people talk for pages at a time, recounting their passions, their moral dilemmas, questioning the existence of God. The Karamazovs demonstrate humanity’s ability to plumb disgusting depths, but in the end, after 900 pages of mostly misery, Alyosha Karamazov cries: “Oh, dear friends, do not be afraid of life! How good is life when one does some good and upright thing!”

5 Responses to War Is Not Good