Flâneur: a French word that means “to wander aimlessly through a city.” It was co-opted by Baudelaire to mean “an observer of urban life,” a bit loosened from its original mooring. Baudelaire was a 19th century poet. As I’ve told you before, poets always start trouble, even if only about the sense of words—or especially about that. I’m not being pretentious: there’s no good English equivalent for flâneur.

These photos all come from wandering through my neighborhood and city, though not always aimlessly, except that the subjects were not planned. They just showed up. s 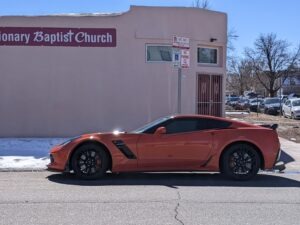 Shiny new Corvette, parked half in the handicapped zone, outside a storefront Baptist church. I did not know how to explain it. 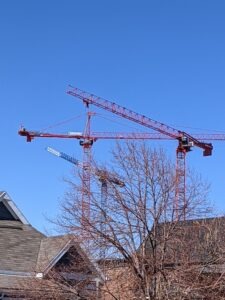 I think of them as vultures, the cranes of RINO, hovering over the Cole neighborhood of modest bungalows that has been undisturbed for decades. For good and bad, the city is changing. 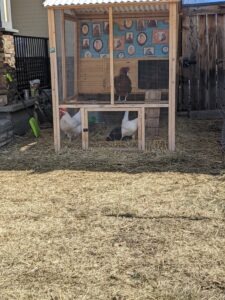 Might be City Park West. But hey, chickens in the front yard. And they have photos of all their ancestors on the wall. 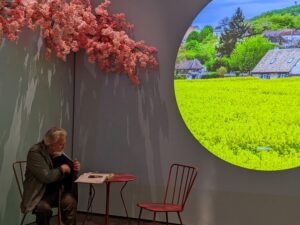 At the Denver Art Museum, a charming attempt to evoke the French countryside American painters fled to in August. Everyone leaves Paris in August, apparently. Phil, having pulled his mask down, searches for his glasses to look at the exhibit catalog. He was disappointed in the quality of its reproductions. 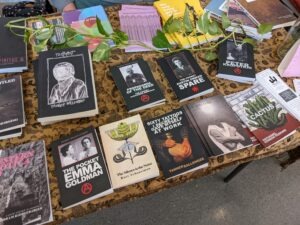 In the Santa Fe Arts district, Denver’s small press book fair gave me hope for the future of literary arts. So many passionate young presses, producing comics and poetry books and novels and everything in between. Much of it will die deserved deaths, but on one of those many tables may be the next great American writer. 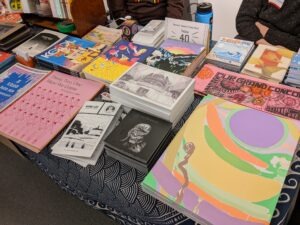 And today, St. Patrick’s Day, thick with wet snow clinging to the trees. One must shake off the beauty bush, which tends to break branches in heavy snow. All around the city, though, tulips poke their intrepid spears through whiteness, happy for the moisture. 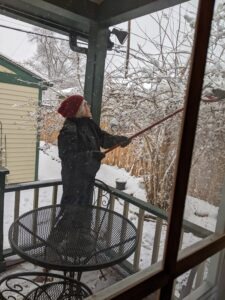