On February 27, 2022, moved by the extraordinary Ukrainian response to the unprovoked invasion by Russia, I wrote a “heat of the moment” poem, posted it on Facebook. It got gratifying response there, but Facebook posts come and go and are soon buried under avalanches of other posts. “Heat of the moment” poems also often need revision, which I’ve done to this one. And now post it here, where it can be saved. 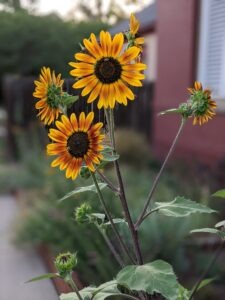 These last two weeks have been a good time to read Kenneth Patchen, a poet who knew how to write against war, but also how to keep glimmers of hope

The guilt of man does not defer the sun.
…Flowers ask no mercy, needing none,
Though stained by blood…

I took the photo of sunflowers in my Denver neighborhood, on an August walk, several years ago. Sunflowers in all their variety will bloom again this year, here and in Ukraine.

There will be flowers

Ukraine, where a woman in coat and kerchief scolds
armed Russian soldiers in the street,
where a young soldier blows himself up with a bridge
to keep Russians from crossing it,
where President Zelensky,
number one on Putin’s hit list,
responds to an American offer to evacuate him:
“I need ammunition, not a ride,”
where nurses bed newborns on the concrete floor
of a basement to escape bombings,
where a truckload of women in their sweats
and gym shoes leaves to defend their country,
among them a young teacher, clutching her rifle
as tears stream down her face,
where both Ukrainian and Russian are native tongues,
where families abide on both sides of borders
and in Russia, at risk of their lives,
thousands demonstrate against the war.
Ukraine, where badly outnumbered forces
have nonetheless held out longer than anyone thought
they could and by week three Kyiv has still not fallen,
where thirty years of independence has raised
a generation that doesn’t remember Soviet repression,
and thirty years is not enough for others to forget it:
Ukraine, where the woman castigating Russian soldiers
in the street offers them sunflower seeds
to keep in their pockets,
so when they die on Ukrainian soil
at least there will be flowers.

14 Responses to For Ukraine