The Music Inn, Part I

“Girl, where’d you get them big legs?”

I stared blankly at the man who asked that, didn’t know where to put it. I was waiting for George to finish my order. As he set the Cutty rocks on my tray, he growled, “Don’t mess with my waitress.” I smiled, delivered the order, bills folded around the middle finger of my left hand, as Brenda taught me. I’d become a member of the club by then.

Sacramento, California, 1967. A black jazz club that surely no longer exists. I was usually the only white person in the place, besides the guitar player. I became an item in that community—the little blonde working at the Music Inn.

It was my introduction to jazz and blues, courtesy of the bands from the Bay that played there. Now I cannot hear the quartet playing, although I can see them—a large black guy on keyboards, a skinny blonde one on guitar, a sax and a handsome drummer who was about to split up with his famous wife, although I don’t know if he knew that. 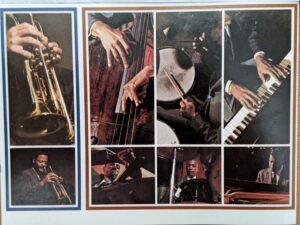 Harold was a welfare supervisor and owner of the Music Inn. I followed him into the dim red and black club. “Pat’s one of my caseworkers on strike. She’s going to waitress for us.” He got no response. Whatever the two of them had been doing, they stopped. The waitress moved to stand shoulder to shoulder with the bartender. Harold asked about last night’s accounts. “In the office like always,” the bartender snapped. Harold escaped behind a red curtain.

The bartender and waitress swiped me with a cold wave of hostility. They’d been handed a white girl with no bar experience. I was probably in bell bottom jeans, looked about seventeen. They didn’t need me, didn’t want me and were stuck with me. They suspected I was there because I was Harold’s new girlfriend, I learned later.

“What can I do?” I asked, that first night. Brenda said, “you can clean those tables.” I turned to look at red-lit glass rings on round black tabletops. George tossed me a wet cloth. I cleaned the tables. I asked what I could do next, put out ashtrays, struggled with drinks and prices, struggled with my fellow workers’ curt coldness, with the bar patrons’ double-takes.

Closing: George counted money and Brenda went behind the bar to wash glasses. I joined her. “Well, you aren’t afraid to work anyway,” she allowed. It was an admission grudgingly made. But it was a start.

The quartet began their gig soon after I started and brought a good crowd. We needed two waitresses then. I came to work as light was fading, worked until two, went to afterhours jam sessions or breakfast, lost touch with the daytime world, the white world.

The band launched into their break music, the keyboard saying “we gotta take care of some business we can’t handle up here on the stage. Sit tight and we’ll be back in fifteen.” Last flourish of drums. George was working an order, so when the musicians came to the bar, I slid back there, pressed the water button to fill their glasses, which they took out to the alley. When they came back, they’d be primed to play.

I wish I remembered real names, especially those of “George,” my wonderful bartender and “Brenda,” my co-worker, a beautiful, brilliant woman who taught me so much. My journal from 1967 is lost. What I have is unfinished, first draft fiction written a decade later. I changed everyone’s names, apparently thereby erasing the real ones from my memory. Besides that, all I have are splinters of recollections.

At the end of the quartet’s stay, word was we’d have a special visitor. A second bartender, third waitress were called in. The second set had begun when she arrived with her entourage, several women flanking her, all in pricey fur-collared coats, men behind them looking like bodyguards. People emptied tables, but I don’t remember them sitting. Her chiseled profile, those high cheekbones, were exactly the exquisite face I’d seen on album covers. She did not smile and her people took that cue. The Music Inn crowd was being cool—no one asked for an autograph. Everyone acted like nothing was happening, but they stared.

Maybe they hoped she’d get on the Music Inn stage, do a number with the band. That wasn’t happening. The good-looking drummer was uptight like I’d never seen him. How hard it must have been for them both—one playing gigs like ours, the other a star.

She stayed for the rest of the set. Maybe she talked to him outside, in the waiting limo, but she didn’t talk to him in the club. A few months later, William Elliott and Dionne Warwick got their first divorce.

9 Responses to The Music Inn, Part I