We have been under house arrest for a month.

Not because of Omicron. Voluntary house arrest.

That is, we voluntarily decided to contract for an upstairs remodel: the hall and our bedroom. For the 37 years we’ve lived here, we have painted over wallpaper lines and plaster cracks and gone on to other projects. 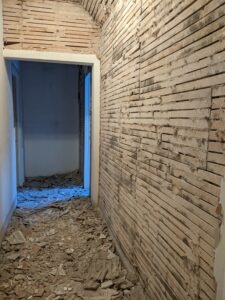 We made the remodel decision in the summer when the pandemic seemed to be receding, scheduled it for January because the contractors we got bids from were booked to January. For some, this is a booming economy.

Our beloved house is a Queen Anne vernacular cottage, built in 1897. Queen Anne for its steep roof, dormers, wrap-around porch and long windows. Vernacular for not having decorative wood trim. Cottage for being a story and a half with small rooms.

My grandson the project manager and Phil’s nose

We’ve done every other room. This project required moving out of our bedroom and making the upstairs bathroom off limits. We were reluctant to do that. The cracked ceiling finally got to us. We’re camping in the downstairs library/guest room, which has a bath. It’s smaller, a bit cramped. Normally I’m fine with that—it discourages guests from staying too long.

We’ve been through this before, know taking down a wall in this old house yields surprises. Wow. A cast iron vent pipe with a big hole in it, connected to nothing. Our project manager took a look behind the studs and said, “this was when they built houses by hand.” 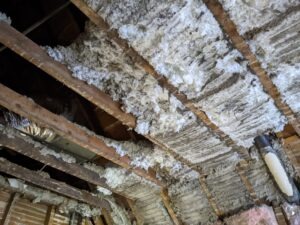 About house arrest. You can’t leave your home when you have workmen coming and going all day. You have to keep your door unlocked. You never know when Carlos is going to call your name, show you some new problem and ask how you want to resolve it, a question that draws way too heavily on your rusty Spanish. Oh, look: three of the ceiling joists are cracked and the rest sag. In their defense, those joists are 125 years old. We better replace them. Vamos a comprarlos. That’ll up the cost, of course. 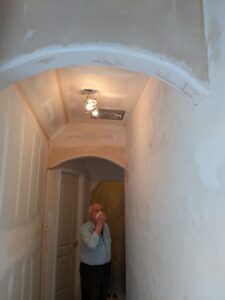 Now it is Sunday afternoon and I hear soft Spanish conversation upstairs amid the clank and thud of the ladder moving around, the occasional nail gun as trim goes up. Carlos and Carlitos, his eldest son, work in admirable harmony. Yes, on Sunday. They need to finish painting before the floor guys come next week and the electrician after that. The new windows might arrive later this decade if we’re lucky. So we said, yes, come on Sunday. We’d rather not live downstairs a day longer than we must.

8:30 on Sunday morning? Could we make it a little later? After our second cup of coffee? I watch wistfully as the idea of going out for breakfast evaporates. But we haven’t much choice. We’re under house arrest. 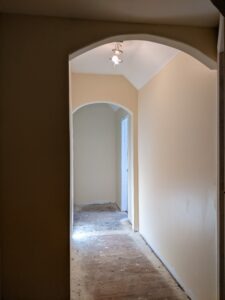