Since I’ve been old, one event a day is all I like to schedule. Someone asks about a 10 a.m. coffee date on Wednesday when I have a dentist appointment at 2. “Can’t Wednesday,” I reply. “How’s Thursday?”

Once I’ve dressed to leave the house, driven across town and had my teeth cleaned, it’s 3:40 when I get home, and I’m done. If I go to the computer I will not be writing or translating anything. I’ll be scrolling through Facebook and playing solitaire.

J-L’s blog makes me tear up. I think it’s one of her best, about staying positive, not letting yourself wallow in the slough of despond, pushing through resistance to get writing done, all things of paramount relevance to me. I post a note, tell her I needed to hear this right now. Then I return to sulking and playing solitaire. 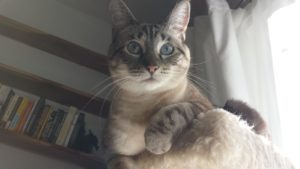 Liat, who wishes to be petted

I woke this January morning with the tail of a dream, an image of brightly ribboned boxes and a voice, saying: “The rich and corporations wrap up their atrocities like gifts and leave them under the tree, but never let them be opened.”

I did not walk all the way to the Greenway today. Some days the hips are happy to do it, some days not.

Every Covid story on the news shows slo-mo shots going into arms, taking forever. I’ve had three of those shots now and for all three, barely felt it, wasn’t sure it’d actually happened. They were over in a twinkling. Dramatic-shots-in-arms footage is fake news.

There’s a pill! A Covid pill has been developed. Read the fine print, please. This is not one pill but twenty. They must be taken within five days of symptoms appearing, or don’t work. You take four a day for five days, or they aren’t effective. They will not keep you from getting sick, but in most cases, should keep you out of the hospital. I wait in vain for the evening news to cover all that. They just keep shouting, “There’s a pill!”

Schools closed the first week after winter break, at several places around the country, including Denver, not for snow and cold but because of staff shortages. Schools closed due to a lack of bus drivers, janitors and teachers. Before Covid, this situation would have shocked us the way empty grocery shelves would have shocked us. Now we nod and go on to the next thing.

Brigitte, who was my student long ago, lives some miles from the area of the Marshall Fire in Boulder County, posted herself safe. The next day near noon she took her children out to ride their trikes. When small white things hit her in the face, she thought: ash. But smokey as the air still was, and despite pockets of pulsing orange, it wasn’t ash. It was snow, the first snow in so ever too long, snow that the entire population of the Front Range must have been yearning, praying desperately for, not just for mountain sports and badly needed moisture, but to end those hellish unprecedented fires. 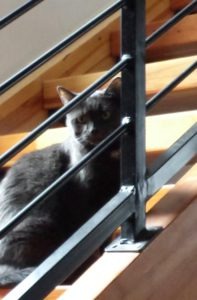 Roo on the stairs

I feed the cats next door when their people are out of town. Once, I read a sonnet to them and made the mistake of telling their owners about it. Now, on their return from the hills, they ask, what did you read to the cats? I was going to read them something from An Inventory of Losses, a strange but moving book by Judith Schalansky, translated from the German, each story about something lost, like the Caspian Tiger (extinct) or the love songs of Sappho (destroyed) but Liat said, “read whatever you want, so long as you’re petting me I don’t care and won’t be listening anyway,” and Mephi demanded, “hey throw some more of those treats, will ya, I LOVE catching them” and Roo, sneaking downstairs without being detected, asked, leaping on the table, “did someone say treats?” So I abandoned the reading. Most of those stories were more like essays and although beautiful, too melancholy for cats.

Passing rapidly through the kitchen on the way to my computer, I veer left suddenly to kiss my husband standing at the sink. He was ready. How’d you know? I demanded. “You came in like a B-52 bomber over Berlin,” he answered. He may not realize that few things are more endearing than a husband doing the dishes.