I read 48 books in 2021. My reading has increased since Covid, one of those silver linings disasters deploy that save us from despair. Here are a few I liked best along with quotes I liked best. Remember, I have an 800-word, four-minute-read max on this blog.

I read a few every year. How’d an English major get this far without reading Great Expectations and Middlemarch? No idea, but I enjoyed both. I read A House for Mr. Biswas, V.S. Naipaul, because it was on Obama’s reading list. Black Lamb and Grey Falcon, 1940, Rebecca West’s magnum opus on the Balkans, is an exhaustively researched travelogue. It is also the history you need to understand that part of the world. An extraordinary, beautifully written concrete block of a book, 1150 pages. I did not finish it. Worth returning to in small doses.

On the victimization of Slavic peoples by various powers over the centuries:

It is sometimes very hard to tell the difference between history and the smell of skunk. —Rebecca West

On Pip’s first view of London:

We Britons had at that time particularly settled that it was treasonable to doubt our having and our being the best of everything: otherwise, while I was scared by the immensity of London, I think I might have had some faint doubts whether it was not rather ugly, crooked, narrow and dirty. —Charles Dickens

Society never made the preposterous demand that a man should think as much about his own qualifications for making a charming girl happy as he thinks of hers for making himself happy. —George Eliot 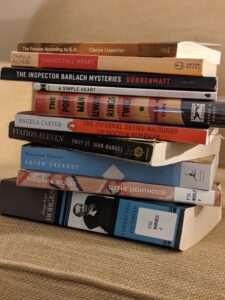 Classic rereads and others

Most rereads were because I taught them last fall. Chekhov and Borges stories. Joyce’s “The Dead,” the best story in Dubliners. Things Fall Apart, Chinua Achebe, read a quarter century ago. I don’t recall it moving me then the way it did this time. I wrote a bit about this in September.

Age was respected among his people, but achievement was revered. As the elders said, if a child washed his hands he could eat with kings. —Chinua Achebe

In high school, Karen and Sarah had done everything to their hair they could think of except take care of it. They had bleached it, shaved it, permed, dyed it, as girls do when vandalizing themselves seems the best way of proving their bodies are theirs.—Susan Choi

When you are born in one century and find yourself walking around in another there’s a certain infirmity to your footing. May we all be so lucky to live long enough to see our time turn to fable.

The sad truth is that, like fish, the looks of the Irish are not improved by sunshine…—Naill Williams

What to Read and Why, Francine Prose. Unfinished Business: Notes of a Chronic Re-Reader, Vivian Gornick. Slow Arrow: Unearthing the Frail Children, Colorado poet Kathryn Winograd’s collection of essays from 9600 feet. 300 Arguments, Sarah Manguso. Ninety pages, three or four arguments (aphorisms? meditations?) to a page. Here are three of them:

Turn forty and suddenly you’re too old to die tragically young, but at least you still have a chance of dying fascinatingly old.

The first beautiful songs you hear tend to stay beautiful because better than beauty, which is everywhere, is the memory of first discovering beauty.

People like to tell my very successful friend that they too, intend to write some books. He always  answers, with big eyes and a ghoulish smile, How hard could it be? —Sarah Manguso

I thought I didn’t read poetry in 2021. Yet nine poetry books appeared on the list. It’s often hard to pick out a few lines of poetry, and I haven’t the space for the many worthy longer poems. So a concise poem from Joseph Hutchison’s Under Sleep’s New Moon: Rescued Poems, 1970 – 1990:

This lake is blue as the secret
light in a saint’s eyes.
Snow-fed, fishless, and at bottom
a jumble of mossy branches.
Even a clear life,
says the pond, is cluttered.
But the wind that gusts over it,
blurring the depths, says:
nothing is wholly true
whose clarity is only calm.

An excerpt from a poem for a new parent, from Olives, A.E. Stallings:

The music that your son will listen to
to drive you mad
has yet to be invented. Be assured,
however, it is approaching from afar
like the light of some Chaldean star.

And to close this reading report, a pithy poem from Ledger, Jane Hirshfield:

Little soul,
you and I will become

A horse
released of the traces
forgets the weight of the wagon.